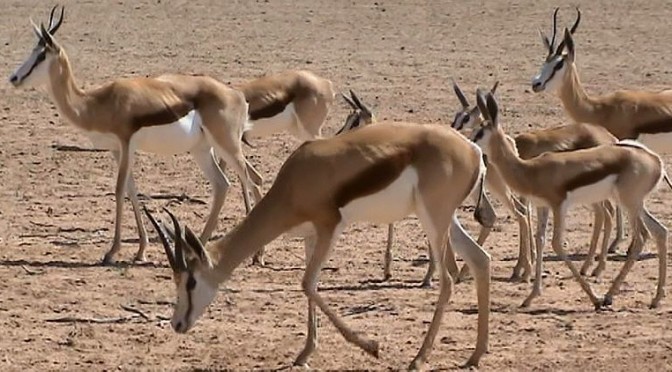 A Trip through the Kgalagadi Transfrontier National Park

We left Cape Town on Sunday to avoid the early morning rush and spent the first night at Bulshoek dam just beyond Clanwilliam. We were the only campers to brave a wet and windy night. 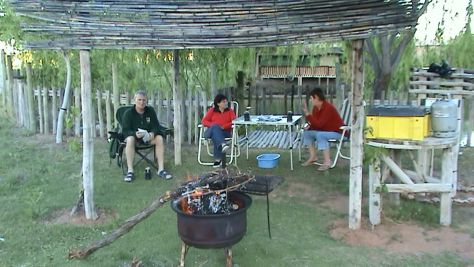 Met up with Tony & Kathy in Vanryhnsdorp for breakfast then took the long road north through Calvinia, Brandvlei and on to Keimoes on the Orange river where we found the ‘Kalahari Waters’ campsite amongst the vineyards and willows of a friendly farmer. Very comfortable and relaxing – should have brought my fishing rod! 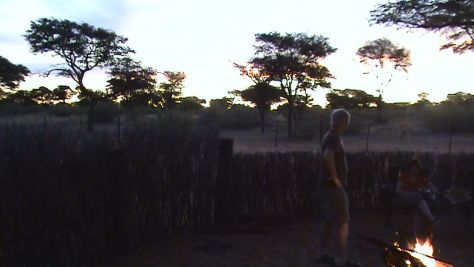 Continued northwards via Uppington, Sishen and Hotazel to cross the border into Botswana at McCarthy’s Rest. Headed for Berrybush farm just outside Tsabong where we found a comfortable lodge and campsite. Settled down around the campfire with the sun setting and the sound of the ‘barking’ geckos, reminded us that we were now truly in the Kalahari. 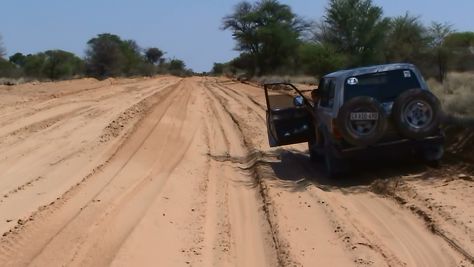 Left Berrybush farm via the back roads and got a bit confused when the track did not match the GPS. After a bit of bundu-bashing and some help from a couple of herders, we intersected the main Tsabong -Mabuasehube road and cruised sedately along a good gravel road until…the Mabua highway – consisting of thick sand and deep tracks for the last 40 odd km before reaching the Mabuasehube gate. 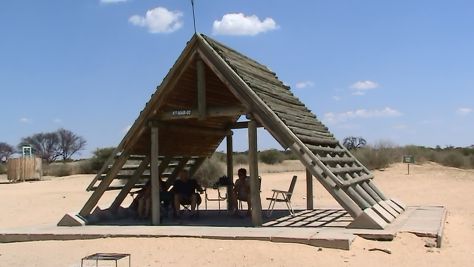 The centerpiece of our campsite at Mabuasehube pan was this sturdy A-frame structure which not only sheltered us from the baking sun, but also the lashing rain of a Kalahari thunderstorm.
In the background is the luxury shower suite with cold running water and just out of frame is the matching longdrop.

Some of the ‘critters’ that shared our campsite at Mabua pan… 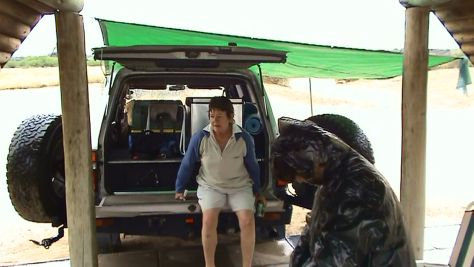 When the winds blow and the rain beats down, you have to have a plan B…. Our little shelter worked well and we caught a few bucketfuls of not so crystal clear rainwater.

Wiley Coyote and the Roadrunner? … Beep! Beep!
No – it’s two more camp critters, Jack the Jackal and Frank the Francolin each putting his best foot forward. As it turns out – they are not the greatest of friends either!

En route from Mabuasehube to Nossob we were lucky enough to encounter this handsome cheetah as well as the omnipresent gemsbuck. The road we followed was washed clean of previous traffic and we were able to pick out dozens of fresh tracks, but unable to positively identify the owners. 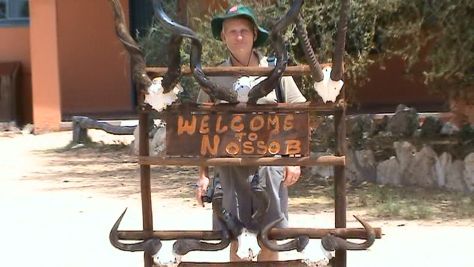 After a 200km stretch of rough and sandy track from Mabuasehube, we arrived at Nossob, the central camp in the South African sector of the park. Although we missed the wildness and desolation of the Mabua pans, fresh provisions and a hot shower were a welcome treat. 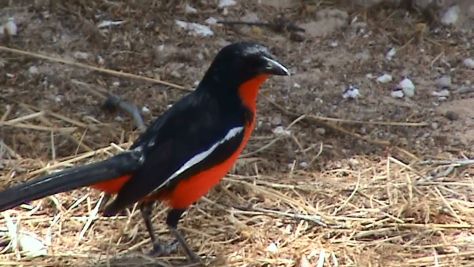 The Crimson Breasted Shrike or BouBou is a common sight around most campsites, but it is powered by the same batteries as that famous pink bunny which makes it rather difficult to get a good photo. 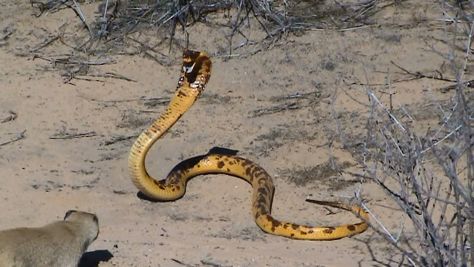 Mongoose to the rescue!
This large and rather attractive Cape Cobra thought it would inspect the neighboring campsite. That was until it was spotted by our resident Mongoose who soon sent it packing. I thought we were going to witness an epic battle, but once the cobra had been driven off the mongoose lost interest and returned to it’ s daily foraging. 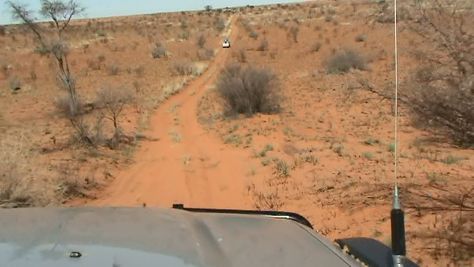 The highlight of our trip – a night in the luxury reed huts at Bitterpan. We set off along the sandy track and traveled for miles over one sand dune after another. Not much game to be seen except for Gemsbuck. 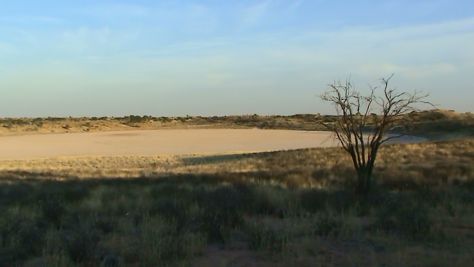 Finally arrived at Bitterpan – nothing to be seen, but a wonderful feeling of calmness and isolation. 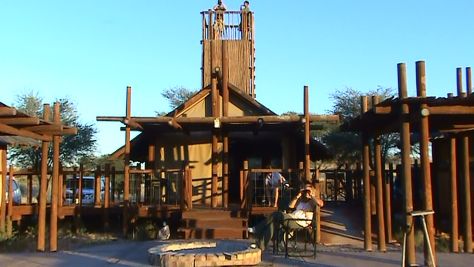 The lodgings at Bitterpan – a central kitchen and dining area flanked by two double rooms on each side, each with it’s own bathroom and loo. Note the communal braai area in the foreground and the intrepid photographer and game scout up in the tower. 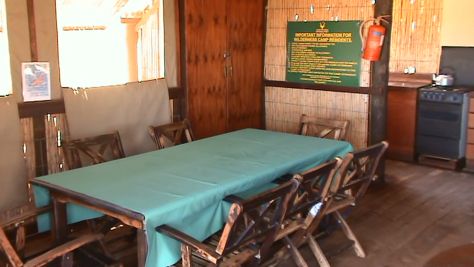 The inside dining area – rather too warm to spend much time sitting in here! 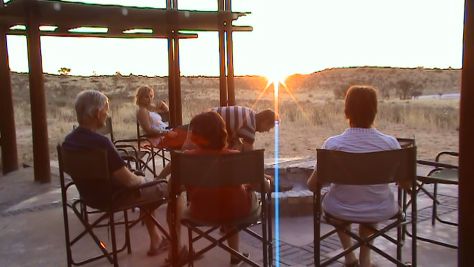 Far cooler sitting around the braai with an ice cold beer as the sun sets. 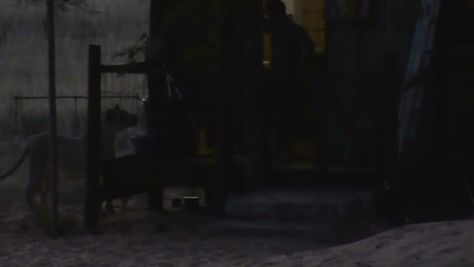 But wait! – what is this skulking around in the shadows?
The rules definitely said “No dogs allowed’, but they never mentioned anything about cats! Here we see an early morning visitor looking very interestedly into the game scouts hut while he calmly stares back at her. 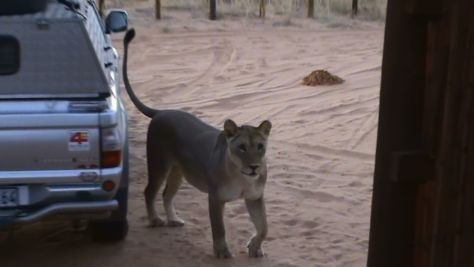 She has just completed a very thorough inspection of Tony’s vehicle which included a free tyre check. Luckily, the game scout distracted her just before she could sink her teeth into the left front tyre – yummy!

She pauses just outside our front balcony before continuing her tour of inspection. Now who’s the caged one?

Before leaving, she was considerate enough to pose fore a couple of portrait shots. 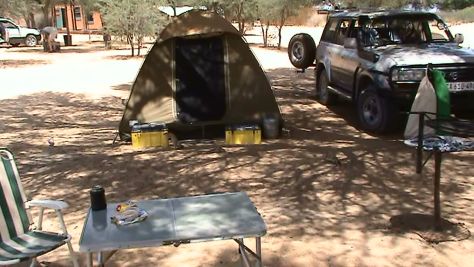 Our shady campsite at Mata-Mata. We had a good view of the waterhole until some campers parked their Landy in the way.

Again, we shared our campsite with a family of ground squirrels both big and small. 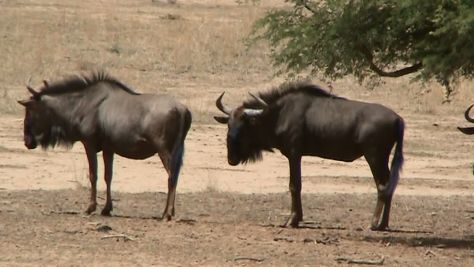 A couple of Wildebeest, part of a larger herd.

A small group of Springbuck. 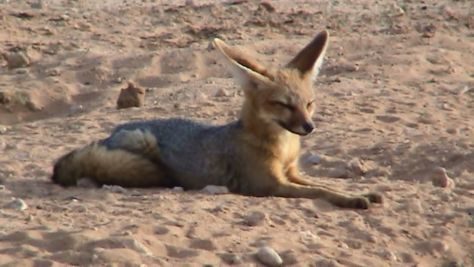 An adult Cape Fox dozing near it’s burrow. If we had got up earlier, we might have seen her pups playing in the sand. 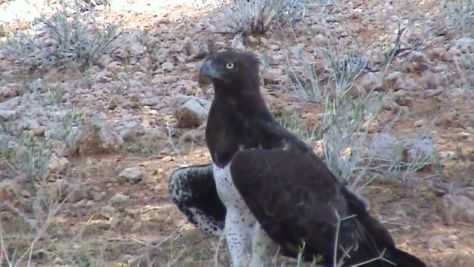 A Marshall Eagle resting in the shade of a thorn tree. 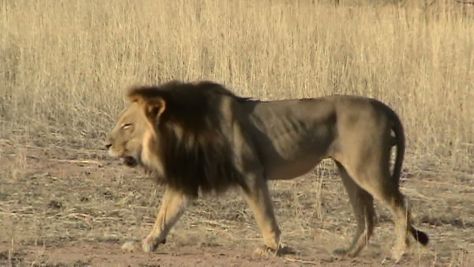 A somewhat gaunt male lion near waterhole #14. A closer look revealed that the poor chap had had an encounter with a porcupine at some stage. His mouth was swollen and the occasional quill could be seen piercing his skin. 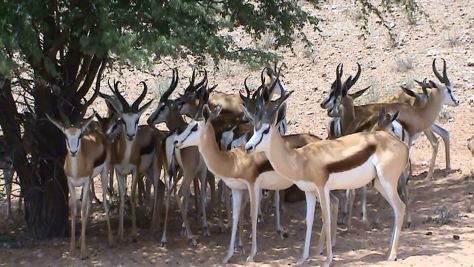 When heat becomes oppressive and even the springbuck seek out the shade of the nearest tree, you know it’s time to switch on the air conditioning and head back to camp for a cold beer even if it is only 9 o’ clock in the morning! 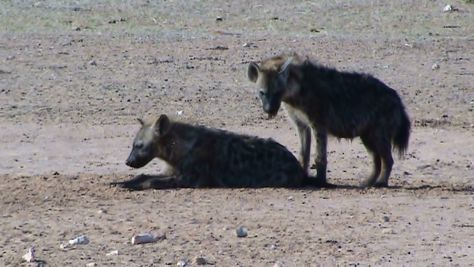 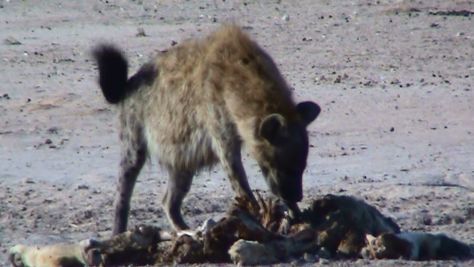 A bad week for lions in the Kgalagadi it would seem. Here we see a rather overfed looking mum picking hungrily at the remains of a lion which had died mysteriously a few days before.
Shortly after this shot was taken we witnessed a lioness in her death throes – most distressing and we could only surmise that she had been bitten by a snake. 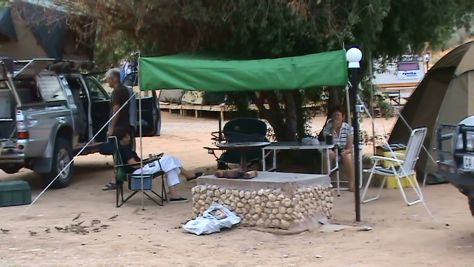 Out comfortable campsite at Tweerivieren with awning set up to ward off an afternoon thunderstorm. 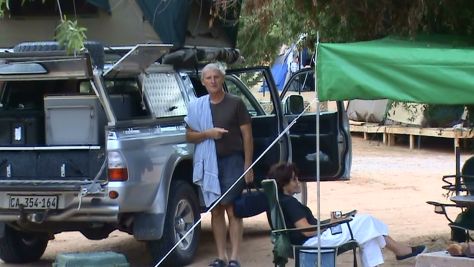 A clean and well groomed Mr. Nicholas.  I’m sure if he had one liter of water left in his water tank and had to choose between having a wash or dying of thirst, he would probably choose the former! 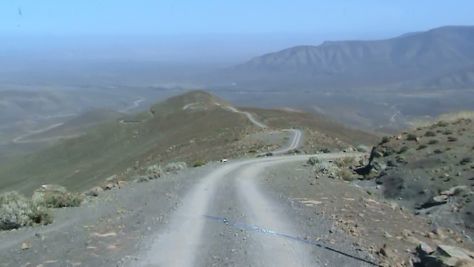 We took the scenic route home via Carnarvon, Fraserburg and Sutherland, avoiding the tar as much as possible. After an pleasant night camping at Skurweberg, a farm just outside Sutherland, we headed down the Ouberg Pass (left) and through the Tankwa Karoo to Ceres. 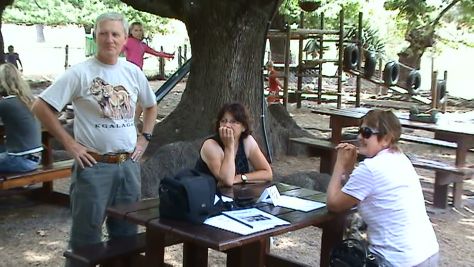 Our final stop for lunch on the long drive home was at the Dam Fine Café near Goudini Spa just outside Rawsonville. They serve a tasty burger and a good glass of wine.

Dreaming of Botswana: photographs of an endless horizon

Adventures with my Landy

Quiz: What type of overlander are you?

A brief history of cross-African overlanding

Trip of a lifetime

CONSERVATION: Not just for Animals

More than just a Store